The history of Homo sapiens is the history of language.
History proper begins when people start writing down their actions and thoughts. The unwritten time is called archaeology: digging for the past.

Prior to the invention of paper, ancient peoples employed many different substances for recording their thoughts: among them papyrus, parchment-vellum (prepared animal skins), cloth, bark, clay tablets and stone. Before they invented the manufacturing of paper, the Chinese used cloth as a writing material. The Phoenicians (Lebanon) were traders; they needed to record sales and we have to thank them for inventing the alphabet: Economy demands simplicity. 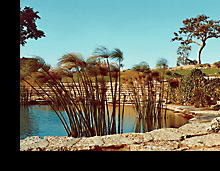 Papyrus
papyrus plants at oasisIn ancient times, papyrus was cultivated in the Nile delta in Egypt. It was used for various purposes and especially as a writing material; scrolls were made of reeds and rushes. The Arabs in Egypt cultivated this plant until the 9th century and until caravans from China arrived. From Egypt, the Arabs spread the art of making paper to Morocco and Spain (Valencia). Paper mills appeared in Italy in 1276 and France in 1348.

Paper is the general term for the substance commonly used for writing or printing upon or for wrapping. All types of paper are made from pulps containing vegetable, mineral, or man-made fibers that form a matted or felted sheet on a screen when moisture is removed.

Thanks to the invention of paper-making, printing presses soon appeared in European cities and universities could stack their libraries with hundreds of books containing knowledge.

Whatever I read – in black and white – I translated into "colorful panorama" to make the adventures of Emanuel Swedenborg more interesting. Whenever possible, I mentioned in The Blue Mirror the book and number from which I got the "story."

On page 610, Julia says: "How to Catch a Husband is from number 178 and has connubial houses as its subject." I quote directly number 178: "Concerning betrothals and marriages in that earth (176 & 177), a daughter, when she arrives at a marriageable age, is kept at home, nor is she allowed to leave the house till the day she is to be married; that then she is conducted to a certain connubial house . . ." I describe in colorful pictures/words what happens with these girls.

On the inhabitants of the moon (111 & 112): Their stature was like boys seven years old, but more robust; thus they were dwarfs. One carried another on his back. They do not speak from the lungs but from the abdomen.

People on Jupiter are described from number 46-84. Quote number 55: "With respect to their manner of walking, they do not walk erect, nor do they creep like animals, but as they go along, they assist themselves with their hands, and alternately half elevate themselves on their feet, and also at every third step turn the face sideways and behind them . .. They usually sit cross-legged. They go naked except with a covering about the loins; they abhor adultery. Their habitations were also shown me. They are low and of wood, but within they are lined with the bark or rind of a tree of palish blue color . . . and they sing psalms." 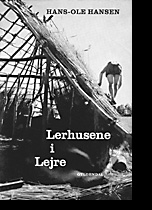 August 1967, I went with my aunt Olga to Copenhagen, Denmark. I wanted to explore the possibility of using the foodstuffs of the "Kitchen Middens" culture for my Neolithic Culinary Delights project. These famous shell mounds – oysters, cockles, mussels as well as animal bones – turned out to be merely a subsistence economy. The Ertebølle culture (4000-2500 BCE) had no agricultural orientation. The Neolithic revolution – FLOUR POWER – was absent. 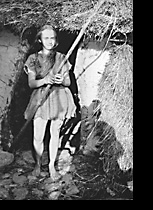 Lady Luck was with me and I met a young anthropologist who invited me to come along to his project: Building a Neolithic village in the countryside. It was fun watching them – dressed accordingly! – doing their chores. I laughed when a "Neolithic woman" showed up pushing a modern baby carriage! We chatted in German. I took pictures. Unfortunately, most of the photographs in my album (1967) had faded, negatives got lost. (The two images shown are from Lerhusene i Lejre by Hans-Ole Hansen, published in 1959 by Gyldendal.) 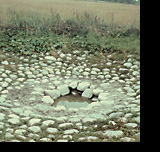 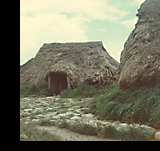 This shows the village well neatly encased and surrounded by cobble stones.

I was allowed to peek inside the one-room house.

Cooking food and wearing clothes are the signs of "civilized" Stone Age people.

The anthropologist told me about a Bronze Age project with Viking-type homesteads. Alas, I can’t remember the location. Auntie, a good sport, joined me. Here are three pictures. 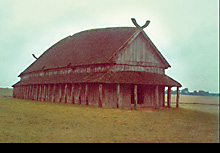 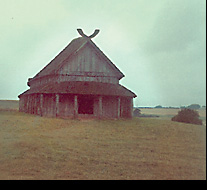 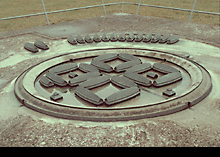 Model / reconstruction of a viking village-homestead

As a treat, I took my aunt, the opera singer, to Tivoli Gardens where Marlene Dietrich was performing. The movie goddess – famous for acting in The Blue Angel and at that time 66 years young – sang in her throaty voice. My aunt clapped heartily while whispering to me "She lost her voice." "But not her figure," I replied, pointing to my aunt’s non-waist; then at the stage performer dressed in sequins. She is as slinky as Hans Christian Andersen’s mermaid statue in the harbor, I thought. 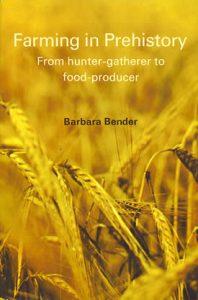 The news I am writing about reminds me of the 1850s when in Ireland the potato blight forced many inhabitants to leave or die of hunger (because they had no access to wheat or couldn’t afford it).

September 24, 2010, agricultural officials from around the world came to Rome to discuss the future of wheat --- the future of food. Yields were not keeping up with the demand of ever hungrier peoples in undeveloped countries.
Wheat, we are told, no longer can be counted on to fill our stomachs as it has since at least 5000 years when villages and city-states emerged in Mesopotamia where growing the golden grain began. Because facing the world (again) was a grave threat: Wheat stem rust.
Billions of spores, carried by winds, settle in wheat plants where they germinate. The threadlike tentacles suck up nutrients and their reddish-brown blister-like pustules (like small pox!) kill the plant.

In the mid-1950s, a stem rust outbreak in Minnesota and the Dakotas wiped out most wheat harvesting. This fungus was thought of having been defeated in the 1960s by crossbreeding resistant wheat varieties.
However, wheat stem rust known as Ug99 was spreading out of Uganda, Africa, in 1999.
From Uganda the fungus spread to Kenya, on to Ethiopia and Sudan, across to Yemen, and, somehow, to Iran. Farmers in Pakistan and India grow millions of hectares of wheat for their naan, chapati, and other bread staples. The Chinese make dumplings and the Near East feasts on pita. In the West, we eat all kinds of breads, pastas, as well as cookies, tarts, and cakes!

Crop diseases are bad news in every way--forcing rising prices! A heat wave this summer (2010) in Russia devastated their wheat output and the price for this plant food skyrocketed; so prices for corn (maize) and other grains also went up. Cattle and fowl are fed corn!
The blame for inadequate food production was also put on shifting climate zones. Deforestation is a culprit (loss of rain fall) and the construction of dams-- causing rivers to dry up so farmers can no longer irrigate their plots.
Humanity, we are told, faces tremendous challenges to food security!

Return to horticulture: Start growing your own food in backyards, patios, even on balconies--tomatoes and cucumbers trained on trellises will thrive in containers. 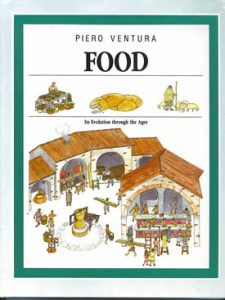 click on the thumbnail to go back to Neolithic Culinary Delights
A wonderful gift (62 pages) for young and old for the holidays. The superb illustrations are mouth-watering! More to come!

"Archaeology is the science of digging a square hole (a grid) and the art of spinning a yarn from it."

When people produced a surplus of a commodity—like grains or pottery—and then started to “barter”—the exchange of goods—the germ of capitalism blossomed. Folks with the largest stockpile became powerful. Capitalism begat civilization: City-states sprouted like mushrooms on the plains of Mesopotamia and Egypt.

Cereal products (wheat and barley) were at the heart of Egyptian society, forming the basis of the economy. Bread and beer were the staples; mashed figs, a natural sweetener, was added to flour to make cakes. Figs were a popular dessert.

Eating for pleasure—prepared meats, fish and vegetables as well as drinking wine—was a luxury for the affluent upper class. 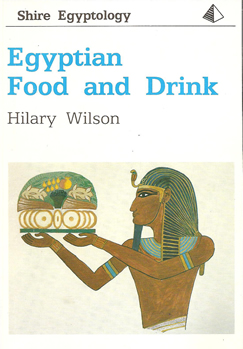 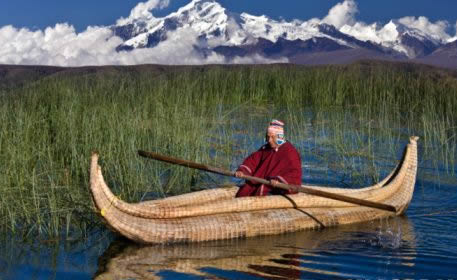 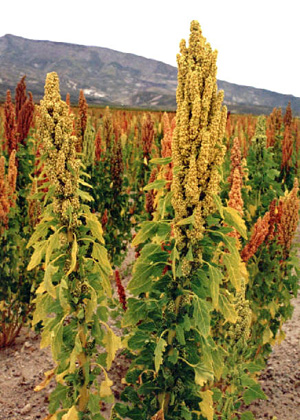 THE SUPERGRAIN OF THE FUTURE

As yet, quinoa is not a staple food. But I predict that this grain will be eaten in countries around the world as it is a miracle food---gluten free, it is ideal for diabetics and celiacs.

Quinoa (a goosefoot plant) was the sacred crop of the South American Aymara Indians of Lake Titicaca in the Andes, Peru.
Quinoa is one of the best sources of protein in the vegetable kingdom. The grain is tiny and tastes like a nut, is low in calories and has high fiber content. Quinoa is a super crop---it is a complete protein as it contains all the essential amino acids; high in magnesium, B2 riboflavin and iron it prevents gallstones and clears migraine headaches.

Quinoa is prepared like rice and is wonderful for stuffing and pilafs. The grain is sprouted like soybeans and eaten in salads. Quinoa flour can be used for making cakes and bread, and for dips like Middle Eastern Tabbouleh.
For breakfast: add honey, nuts and fruits to cooked quinoa (like cooked oats).
For lunch: cooking the grain, add turmeric, ginger, herbs and green peas. Serve with a side dish of roasted veggies.
For vegans I can recommend Quinoa Veggie Burgers made with cooked quinoa, mashed sweet potato, pureed kidney beans, garlic, herbs, favorite spices and bread crumbs. Chill the mass in the refrigerator for several hours.
Form patties, coat with breadcrumbs and pan fry.
The mass can be served warm with roasted chicken or turkey.
Bon appetit! 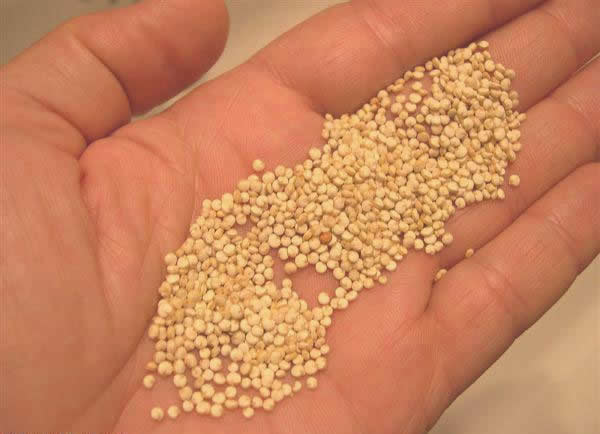 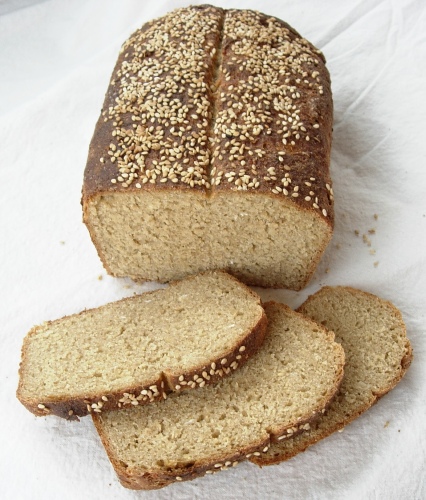