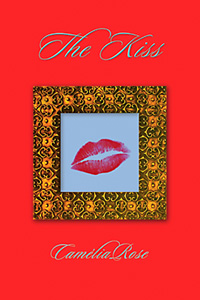 The triangle: Joram, a rich, neurotic art collector; Janine, his ex-wife infatuated with The Kiss, a Gustav Klimt painting; and Elizabeth, the second wife, a promising 21st-century painter.

Janine, a 60-year-old divorcée, returns "home" after a 35-year absence. She puts up a print of The Kiss on her bedroom wall; to remind her of her folly of kissing a stranger in a nightclub in Peru. In her nightstand she keeps Masochism in Modern Man.

The comedy starts when Janine contacts a private detective to check up on Jerry the gay voyeur.

Janine’s neighbor Susan pops in and gossips about another neighbor having conceived a baby while the husband was absent. Janine starts to think. She goes online (stalking) to view Elizabeth’s résumé and look at some of her paintings.

While having a tryst in Janine’s bedroom, Bill offers to arrange for her to enter the painter’s studio while the family is on vacation.

The detective has prepared a "CV" on Jerry and phones Janine. She goes to Belmont Nurseries and asks Lily, at the cash register, for the envelope. She invites her for dinner that evening. She shows Lily The Kiss, chats about Joram’s family and tells her about the "mystery baby." Lily introduces her to Donna, who also works for the detective agency. Janine’s hunch that Elizabeth’s son David may not be Joram’s is supported by Bill.

The day for visiting the painter’s studio has arrived. Dressed in black, Janine leaves with her tote that includes a mask, a camera, a flashlight, red heart stickers and a photo of Joram and his brother Gabriel. She is in awe viewing paintings that were not online. She sticks red hearts on three paintings; her favorite is My Life and she snaps pictures. She puts a red heart on the photo-frame of David standing on a side table. She puts the photo of Joram and Gabriel between the pages of the Bible that’s in the drawer and her phone number (3020) on a piece of paper. Having planted her mystery clues, Janine goes to the bar and opens a small bottle of champagne. Sipping, she gazes at David’s photo; so like Gabriel. She puts the empty bottle and the glass in her tote and leaves. The next morning she makes a printout of My Life and scotch-tapes it next to The Kiss on her bedroom wall.

The following morning Elizabeth returns to her studio, ready to confront a lover of having stolen money from her purse. She calls Poldie and orders him to show up that evening. The detective calls the studio to leave a message but Elizabeth snaps: "Tonight!" He calls one of his assistants, gay Gorgeous Adam, who persuades Elizabeth to see him that same evening. Gorgeous Adam tells her that Jerry is not to be trusted and she should get another security system to check out her premises. Elizabeth goes to the bar, opens a bottle of champagne and discovers that her special glass is missing. She wonders: Jerry? Poldie arrives. He and Gorgeous Adam leave together, Elizabeth waving and smiling. She then calls Sensor Security, but Jerry is not in.

The next morning, Sunday, Elizabeth calls Jerry at home; her glass is missing and, who has entered her studio? Jerry calls Bill, telling him about the missing glass and that he’s going on vacation; Bill is in charge.

Bill calls Janine, who confesses; she’ll replace the glass. Janine makes a print-out of Jerry’s CV. She goes to the Mall and buys a Baccarat tulip glass. Then she puts the parcel and CV underneath the rhododendrons at the entrance to Joram’s house, for Bill. He retrieves the items, reads the CV and heaves a sigh of relief. He then breaks the glass in two, and throws the pieces in the yews in front of the studio door. He goes inside, looks for spy-ware to remove. He also goes to the house and removes the spy camera from Joram’s bedroom.

The next day Elizabeth sees the broken glass but it’s not hers; her glass has the initials Q.E. engraved on the foot. She drives to the Mall and buys a Baccarat tulip glass and a photo-frame. She calls Bill that she has found the glass behind the sofa. She puts a picture of David in the frame and sticks a red heart on it and wraps it up in fancy paper. Poldie arrives. She orders him to personally hand over the parcel to Janine. He must call her when his mission is accomplished. When she receives his call, she dials 3020; the women will rendezvous at the studio the next morning.

Janine arrives with The Kiss print wrapped in silk. She and Elizabeth talk about Joram and his obsession with "virginity." Elizabeth tells about David, her son; she had seduced Gabriel at a New Year’s party. Elizabeth promises Janine another painting; she’ll keep The Kiss.

When Janine returns home, she goes to her bedroom and in the empty place on the wall puts up David’s photo (now lamenting her folly of being childless).