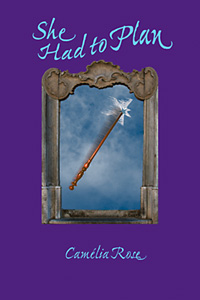 Grandmother Valerie: rich and manipulative; ambitious to have her family name in the limelight. Reno: Pastor of a non-denominational Christian faith who wants his Tamarisk Tree Chapel on the map. Renata: 10-years of age; easily influenced; eager to see her face on television. Linda and Leo, the girl’s parents: They succumb to Valerie’s wishes for fame but in the end their love for Renata triumphs and they out-maneuver Valerie.

May 5th is an important date in the Wynnewood family. Valerie introduces Renata to the Alabanda. This esoteric abode was created next to Valerie’s dressing room when she was a young widow; the Alabanda became her refuge, her temple of solace.

Valerie calls Renata "Star of God;" stars are messengers. Renata learns the magic spell: "Aboo, Habba, Nana." She’s given Aya, the magic wand topped with a crystal star. She’s introduced to the altar called Shambo; the bronze chameleon named Victor; and the center of attention, the Eegeegee, a crystal ball for gazing. Valerie narrates the story of how this crystal ball came into the possession of the Wynnewood family. Renata is enthralled to learn about "kooreeboo," an ancient, protecting spirit/angel.

Valerie promises Renata to introduce her to the rituals, ceremonies, of her beloved Alabanda. She is given a magic flower: the veronica; she who brings victory. Her magic number is five and her magic name is Roma. Valerie also gives her a diary, a blue book with a white star. Renata names the book Gizella.

Linda gives her daughter a precious, ancient bee amulet; Renata’s now a princess because only bees have a queen.

Leo Andini, a sculptor, invites daughter Renata to his studio. He shows her his latest artwork for Reno’s chapel. She learns that trees are the oldest inhabitants of planet Earth; the speaking tree of the garden in Eden?

An old oak, Zadkiel, is Renata’s hide-out where she spies on people; while posting, she hears a voice whisper between the leaves that she’s Renata’s "kooreeboo;" she’s there for her any time she needs advice.

A week later, May 13th, Renata visits her grandmother again. Valerie points to the front page of the newspaper on the coffee table and tells her that in 1917 the Lady of the Rosary had appeared in a vision to a girl her age. Lucia saw and spoke with the lady several times, who asked Lucia to have a chapel built for her. That’s how Fatima in Portugal became a pilgrimage destination.

Renata goes to her hide-out, Zadkiel, hoping to hear the voice again and she does. In the future they’ll meet at the apple tree at the pond.

Tamarisk Tree Chapel (a converted old schoolhouse) was founded by Renato Andini in 1985 in Buckingham. Sunday, May 20th, Pastor Renato chants at the altar that the Spirit of God was hovering over the waters. Renata hears the voice say that "her" name is Lady Saint Maya; she would appear above the pulpit. After the service, at the chapel door, Renata tells the pastor that she had a vision of Lady Saint Maya who would give her a message next month. A newspaper reporter overhears her words.

Valerie tells Renata stories of girls and shepherds who had visions. She wants to know more about Lady Saint Maya’s "message," but Renata says the Lady will inform her later. Valerie decides that Renata has "cosmic communion." Valerie encourages Pastor Renato to give exciting sermons on Old Testament celebrities like Judah and Tamar, who tricked her father-in-law. The reporter, Sam Nickels, writes about the standing-room only chapel attendance. He writes an article on "visions and apparitions" and wants to interview Renata. Unexpectedly Renata leaves with her father for Italy to visit her grandmother Andrea. So Valerie has her luncheon with Sam Nickels at Villa Wynnewood and they discuss past visionaries: like St. Joan, The Maid of Orleans who had heard the voices of St. Catherine and St. Margaret; Mary Baker Eddy who founded by revelation Christian Science; Lucia of Fatima, Portugal, and Joseph Smith, who had seen in the woods of New York State God, Jesus, and the angel Moroni. None of the visionaries were put to the test by a medical team. And if Renata has to undergo psychiatric evaluation, Valerie would insist that the president of the Latter Day Saints also would get his head examined. Valerie shows Sam Leo’s artwork at the studio and mentions the piece "Salvation" for Tamarisk Tree Chapel to be unveiled on August 15th.

Newspaper headline: Can only Roman Catholic girls have visions?

Valerie receives threatening telephone calls from readers. She’s reminded of the Fraudulent Medium’s Act passed long ago. The chapel is a faux faith and the pastor a crook.

Renata returns from Italy with blue beads that had belonged to an Andini ancestor. She is told that on August 15th her "message" is: Blessed Are the Peacemakers. Sam Nickels writes about the miracle beads.

Linda decides that she has to stop this "nonsense" and she traps her mother on a video reading Renata’s diary Gizella that was locked up in a box underneath Renata’s bed.

Mother Valerie and daughter Linda have a serious talkfest.

Valerie decides to give up control and to make peace with Linda and Leo for the sake of her beloved "soul mate," Renata.